Lightning is a tricky thing. Lightning is generally formed during storms, but this is not always the case. Lightning is essentially a supercharged form of static electricity. The e 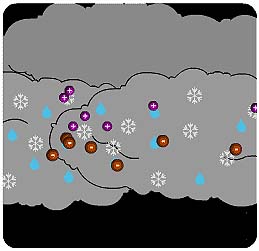 lectrical charges build up when storm clouds reach high into the atmosphere where water particles are either frozen or remaining liquid as super-cooled water.

As these droplets of ice and rain fall through the atmosphere’s natural electric field, they become either positively or negatively electrically polarized. When these polar-charged particles come in contact with one another, they become charged by electrostatic induction- larger particles being charged negatively and smaller particles being charged positively. The storm cloud’s turbulence and drafts push the lighter (positive) particles upwards, where, the lighter particles (negative) are then pushed downwards within the storm cloud. This causes a build up of negative charge at the lower portion of the cloud.

Once this electrical potential is great enough, the electrical field causes the air to ionize, breaking its resistance, and allowing spark or lightning to jump across the air gap. This can be to another cloud that has been charged similarly to the source cloud or this can be diverted to the ground if the path of least resistance allows it. Each lightning bolt (positive or negative) will generally accumulate 10,000,000 volts to over 100,000,000 volts- super-heating the air to about 50,000 degrees Fahrenheit. This turns the air white-hot and creates the bolt we see for that brief amount of time.

As this action is so quick, it will cause the air to expand, resulting in a sonic boom. The approximate rule of flash to sound (lightning vs. thunder) is this: 1 mile away would take about 5 seconds to be heard.

Lightning is always simply finding the path of least resistance. It can go from the top of the storm cloud to the bottom, it can jump to another cloud, or it can travel to an object on the ground- provided the potential difference is great enough. Essentially, if you have a negatively charged cloud and a positively charged lightning rod with high conductivity, the lightning bolt will deem that the fastest route with the least amount of resistance. That is why our products and our lightning protection systems are designed the way they are- to achieve the path of least resistance.

Now, this cannot be guaranteed as we have yet to harness and direct lightning. Lightning could very well see a full lightning protection system on a house, which would be the least resistance, but, strike the tree that is 30 feet taller, 20 feet away. The path of least resistance can sometimes be compromised by the size and height of surrounding objects. Generally, the tallest objects will be targeted first. This is not a rule of thumb. Lightning could see every tall object and still find its way to the ground through any means possible. Though this random event could take place anywhere, a lightning protection system afford safety when the lucky number becomes your house, or commercial building, or agricultural implement. Better to be safe than sorry.

Positive Lightning: As discussed earlier in this page, we had talked about how the general lightning bolt will derive from a negatively charged source in the cloud. This is not always the case. Lightning can also come from the top of the cloud, resulting in a positive lightning strike. The lightning bolt will follow the same scenario as a negative lightning bolt, but, this will carry a positive charge and its ground streamers will have a negative charge. It may not seem like much of a difference, as positive lightning strikes make up less than 5% of all lightning strikes. These carry a ton more power within them. Since it originates from the upper levels of the cloud, the amount of air it must burn through to reach the ground is significantly greater. The flash duration is longer and its peak charge and potential could be up to ten times greater than a negative strike. This promotes a different type of danger.

Some positive strikes can occur within the parent storm and strike the ground. Some positive strikes can also occur near the edge of the cloud or from the thunderstorm’s anvil from which a strike can occur more than 25 miles away from the parent cloud. This doubly makes the rule of thumb “if you hear thunder, you could be struck regardless of where the Doppler radar says the storm is located” quite important. Remember: When Thunder Roars, Go Indoors.

There is also Bipolar lightning which is lightning that actually changes its polarity as it is released. This is something not many fully understand but that just shows how complex of a planet we live on.

Sprites are a mysterious form of lightning that dances near the edge of space. They are bursts of electricity that reach altitudes of about 50 miles that are bright enough to see in daylight. Often shaped like a jellyfish, starting as balls of light, these are definitely both 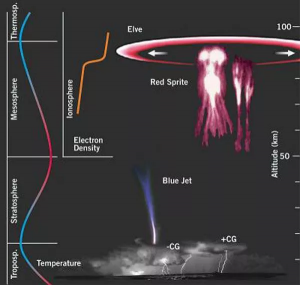 a mystery and a wonder. A culprit of positive lightning.

Elves are similar to sprites, but look more like a halo and can be up to four times wider. Another culprit of positive lightning.

Blue Jets are cones of blue light that are brighter than sprites. These spray upward from the tops of thunderclouds. They will reach an altitude of about 25 miles and seem to be linked with strong hail.

Here is a little video pertaining to lightning safety.

These are the 5 ways that lightning can strike a person.

Some Safety Precautions if a Storm is Coming

“When Thunder Roars, Go Indoors”: find someplace that is enclosed, safe, and postpone your trip or activity.

If you have no shelter to easily access, crouch low. Make sure that you have as little of your body touching the ground as possible as lightning causes electric currents along the top of the ground. This can be deadly over 100 feet away.

Lightning can travel through walls, bars, wires, flooring, and electrical components (like microwaves, shower heads, etc.), so be mindful.

Lightning can travel through plumbing so no showers until after the storm.

When it comes to lightning safety on the job:

Don’t start a job with a pending storm coming that you cannot quickly stop.

Know what objects and equipment to avoid during a thunderstorm.

If a co-worker is struck by lightning, perform CPR immediately. The number one cause of death by lightning is cardiac arrest. Lightning victims do not carry any electrical charge, so they will be safe to the touch. Use an AED (automatic external defibrillator) if one is available.

Included is a data sheet from OSHA that can be used as a guide for working outdoors here.